For those who have never heard of the 4% rule, it was invented by Bill Bengen, a financial advisor in Southern California, in 1994.  His theory was simple enough, that if one were to only withdraw a maximum of 4% from retirement savings each year that the principal would erode slow enough that the investor…

For those who have never heard of the 4% rule, it was invented by Bill Bengen, a financial advisor in Southern California, in 1994.  His theory was simple enough, that if one were to only withdraw a maximum of 4% from retirement savings each year that the principal would erode slow enough that the investor would not outlive his/her money.  Mr. Bengen demonstrated in a study that if retirees followed the plan, and increased their withdrawals over the years to adjust for inflation, their savings would last them for 30 years.

The problem the 4% rule faces is that it ignores a few things: (1) sequence of returns or volatility in the market, (2) periods of high inflation, and (3) low interest rate environments.

Most people understand the concept of average rate of return (either for the market as a whole or for specific investments).  For example, the average annual return of the S&P 500 from 1990 to 2009 was 8.23%, yet the range of returns varied dramatically from 37.6% in 1995 to -37.0% in 2008.  Averages do not account for the variability of investment performance.

During the accumulation phase when there is no draw on investments, this is not an issue.  An investor is able to withstand periods of volatility and ultimately achieve the average return for any given holding period, assuming the dollars always stay invested.  But for those in retirement deriving income by drawing down on assets, the variability of performance can have a huge impact on how long retirement savings will last.

Consider this example: A retired couple with a portfolio of $1 million plans to withdraw 5% or $50,000 per year, adjusted for inflation (3.5%) each year.  If the portfolio generates a steady annualized return of 6% per year, the couple could count on their distributions lasting for about 30 years.  The key word is “steady” which has hardly been the experience in the market over the last 10 years.  The couple will more likely experience a series of returns, with the sequence having a large impact on how long the assets will last.

The couple’s portfolio will more likely move up and down each year.  As an example, we can still keep the 6% average return over 30 years, but add four distinct rate-of-return values cycling every four years to see what would happen.  The four values would show the portfolio earning 23% in year one, 9% in year two, 7% in year three, and -15% in year four.  The rotation begins applying these market returns to the portfolio while withdrawing $50,000 per year until the value hits zero.  We then compare that result with the reverse sequence rotation starting with -15%, then 7%, 9% and 23%.  The chart below shows that the different sequencing of returns represents a 13-year difference in how long the money will last even though both scenarios have the same annualized returns.

The couples “nest egg” could run out much more quickly than anticipated, or could be extended if investments perform better in the early years.  The problem is the unpredictability of variable investments in the short run.  Accurately projecting an average annual return over an extended period of time is hard enough, projecting specific returns each year to determine how they will affect a distribution strategy is unfortunately impossible. 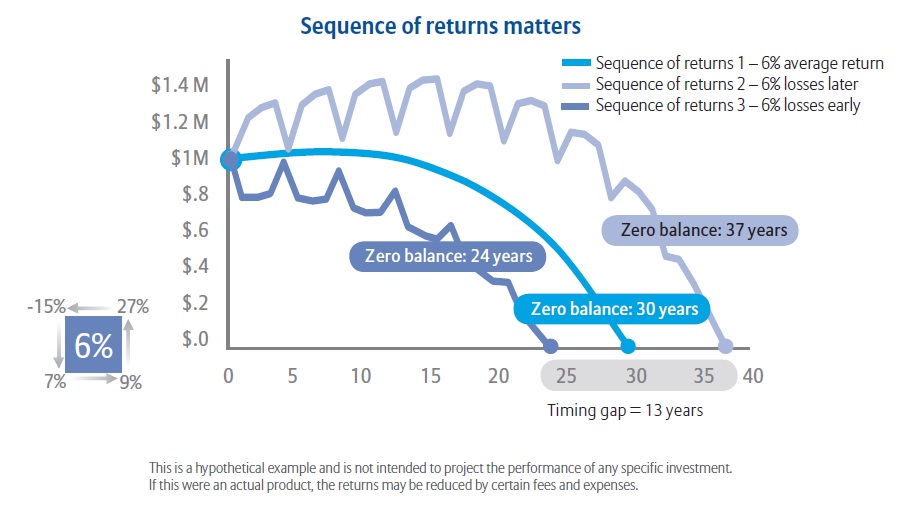 The debate about the effects of government stimulus on inflation has been raging in the United States since President Obama came into office.  Whether one believes we are experiencing inflation now or not, many agree that inflation will hit and hit hard sometime in the future.

One area that is hard to ignore is how expensive healthcare has become.  Compared to the 29% increase in the Consumer Price Index from 1999-2008, health care expenses rose 119%.  Premiums are expected to take their biggest jump ever next year with the Supreme Court upholding the constitutionality of Obamacare.  As the saying goes, there is no such thing as a free lunch.  According to Charles Blahous,, of George Mason University’s Mercatus Center, the projection is that Obamacare will add $1,160 billion to net federal spending over the next 10 years and at least $340 billion to federal budget deficits in that time.  $1,160 billion is another way of saying $1.1 trillion dollars, ouch!

The reality for baby boomers is that health care expenses are going to become more significant as they grow older.  Despite the rising awareness of escalating health care costs, solutions have not yet been found.  This is going to have a dramatic effect on retirement.  Other areas of worry are the price of gas.  Oil fell from $100 into the $80’s in June, but $80 oil is still a substantial increase over where we were 10 years ago.  In 2002, the average price per barrel was $22.81.

Prior to the Great Recession that hit in 2008, money market accounts were paying in the 4-5% range.  Today, the average money market is around 0.1% and 5 year CD’s are only paying 1-1.25%.  An investor’s principal will run out in a very short period of time if they are taking out a 4% distribution but only making 1%.  Because rates are so low, there has been an incredible drag created on portfolios that have large allocations to cash, money markets, and CD’s.

Exasperating the problem of low interest rates is an investor’s ability to depend on Social Security as in income supplement.  When Social Security was created in 1930 the average person was not even expected to reach retirement age of 65.  Now people are living well into their 80’s.  The ratio of workers paying into the system to support each beneficiary has declined dramatically since 1950, and will continue to decline in the future: In 1950 there were 16.5 workers contributing for each person receiving social security benefits.  In 2005 the ratio was 3.3:1, and in 2025 the ratio is expected to be 2.3:1 (according to “The 2009 Annual Report of the Board of Trustees of the Federal Old-Age and Survivors Insurance and Federal Disability Insurance Trust Funds”).  This isn’t a problem that the government is trying to hide.  In April, the U.S. government said in regards to its primary trust fund, Social Security is now projected to run dry three years sooner than anticipated.

The fund that helps finance benefits for 44 million senior citizens and survivors of deceased workers will be exhausted by 2035, the program’s trustees said in an annual report. Aid would have to be cut at that point if Congress doesn’t intervene.  Social Security’s disability program, which helps support 11 million Americans, will run through its trust fund in 2016, two years earlier than predicted.

Where to Find Retirement Income

People need to save more for retirement and be realistic when assessing what retirement is going to look like.  Advisors are going to need to find new strategies to make sure their clients are able to achieve their goals and objectives.  South Coast uses several strategies and programs that we believe put our clients in a position to be successful despite the difficulties we face ahead.

The closer one gets to retirement, the more careful one needs to be.  Once a person is within 10 years of wanting to retire, the time horizon may have shortened to a point that there may not be enough time to catch up if substantial losses are incurred (i.e. many people who thought they were going to retire in 2008 are probably still working).  This is where the right tactical manager can make all the difference.  Protecting downside should become the most important priority.

Using hard assets that benefit from inflation like real estate and energy can also play a vital role for those investors seeking income.  Many of the programs offered through South Coast have tax advantages on the income being generated.  With taxes on their way up, the more we can keep from paying Uncle Sam, the longer retirement savings should last.

Most importantly, people don’t just wake up one day and are able to retire.  Retiring in comfort takes a dedicated plan with a dedicated advisor.  Investors must be willing to adapt and understand how to manage risk in a portfolio.  The old ways need to be re-evaluated and updated for the reality of today.