Rental Rates for Apartments on the Rise in Manhattan

It’s become a tough environment for tenants looking for apartments in Manhattan.  In April from March, the average rent climbed over 4%, attributed to the low vacancy rate seen throughout the Manhattan borough.  New York City continues to have the lowest vacancy rate of only 2.1% among cities in the United States tracked by real-estate…

Rental Rates for Apartments on the Rise in Manhattan 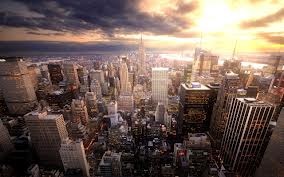 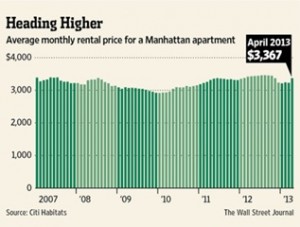 It’s become a tough environment for tenants looking for apartments in Manhattan.  In April from March, the average rent climbed over 4%, attributed to the low vacancy rate seen throughout the Manhattan borough.  New York City continues to have the lowest vacancy rate of only 2.1% among cities in the United States tracked by real-estate research firm Reis Inc.  This is shocking considering the average apartment in Manhattan goes for $3,367 per month.  Comparable cities include Phoenix, Orlando, Seattle, and San Francisco, all of which have experienced large reductions in their vacancies and rising rents since 2009, but no vacancies remain as low as New York City.  The low vacancy rate and tight inventory might be unfavorable for renters, but an attractive proposition for landlords.

Because the market is so tight, many renters re-up their current leases with landlords.  This retention is beneficial for landlords as they’re able to spend less time and money finding new renters for their units. This also enables landlords to increase rental rates on their current tenants. If the market for rentals weren’t as tight, landlords would have to keep their rates low in order to maintain occupancy in such a competitive environment.

Seasonality has played a factor for increases in the last few months.  Rents normally drift lower during the fall and winter, and rise modestly in the spring and summer. With the end of the school year, new college graduates move to the city, and families with children prefer to relocate during the spring and summer months creating more demand.  This last year Manhattan has seen sustained growth even through the slower seasons of fall and winter, maintaining the $3,100 – $3,300 median range, with a slight dip in December 2012.

In 2012, landlords raised rents faster than incomes were rising resulting in a pushback from tenants, according to Gary Malin, the president of Citi Habitats. Now after that pause, “we are starting to see that rents go up again,” he said.  “There is no weakness in the market at all.”  Some of this is attributed to a strengthening New York City economy.  Jonathan Miller, president of appraiser, Miller Samuel Inc notes that in 2013 landlords have been less aggressive in raising rents for existing tenants, resulting in more tenants renewing leases, leaving less inventory in the market. 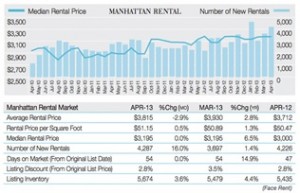 As the economy continues to improve, and the unemployment rate decreases, demand for apartments should continue to increase in Manhattan.  Rents have been climbing through the recovery of the last several years.  They hit a record in August 2012 of $3,461 a month, according to Citi Habitats.  Observers of the rental market agree that, while the housing market is an increasing threat, fundamentals for the rental market should remain strong. The determinant to increasing rental rates is the current affordability of owning a home, with rates at record lows. However, with stricter lending standards, coming up with the down payment necessary to purchase is still no easy task.

Owners of multi-family properties in Manhattan are well positioned.  In a market with high barriers to entry, supply should remain constrained while demand continues to rise.  Simple economics tells us rents (direct correlation to value) should continue to rise.