Relative to expectations, US economic activity appears to have hit a soft patch as of late.  A number of factors, to varying degrees, seem to be of blame, including the weather the West Coast port disruption, as well as the impacts of the higher dollar and weaker global demand.  However, we believe most of these…

Relative to expectations, US economic activity appears to have hit a soft patch as of late.  A number of factors, to varying degrees, seem to be of blame, including the weather the West Coast port disruption, as well as the impacts of the higher dollar and weaker global demand.  However, we believe most of these factors are transitory or short lived.  The port dispute has been resolved, and, with spring here, warmer weather is around the corner.  Thus, we continue to expect better economic growth to materialize in the months ahead.

Perhaps the biggest disappointment so far has been the pace of consumer spending.  Despite strong job growth, high confidence, and the decline in gas prices leaving more money in the consumers’ pockets, the last couple of retail sales reports have come in weaker than expected.  We believe part of this is due to the weather.  While online retailers had their best month since 2013, auto and building materials – two categories most impacted by harsh winter weather – posted poor results.  Weakness in both of these categories is likely to rebound as more moderate weather returns, and as the boost from lower gasoline prices kicks in.

Along with the large increases in employment and the pickup in compensation, the decline in energy prices has led to a sharp rise in the real incomes over the past several months.  So far, however, households appear to have saved rather than spent their gasoline windfalls.  We’ve seen that the savings rate has risen to a two-year high of 5.8% despite household net wealth being back near the level last seen before the recession.  As Figure 1 illustrates, this is consistent with the savings rate falling, not rising. 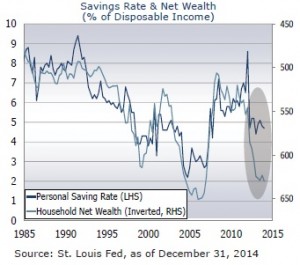 For now, households have seemed to take a “wait and see” approach to spending their extra savings from lower gasoline prices.  In recent years, households have waited roughly six months before adjusting their spending to gasoline price swings.  The upshot is that even though consumers have not yet taken full advantage of their savings on gasoline, with household financial positions getting stronger, they should still have a lot of scope to increase spending.

Likewise, it appears that a number of transitory factors are behind the recent slump in US industrial production, and better output is likely over the next couple of quarters.  February’s manufacturing decline was caused in part because inclement weather prevented some workers from commuting to their factories, while comments in the most recent manufacturing surveys indicated a good deal of weakening was also due to the West Coast dock slowdown.

It is true that US manufactures appear to be struggling with the stronger dollar that the collapse in oil prices has triggered a sharp decline in mining output.  However, it is worth remembering that for a net oil importer like the US, the lower oil price is a positive for the economy as a whole.  With the overall economy in good shape, strong domestic demand should ensure that manufacturing output continues to grow at a reasonable pace despite headwinds from abroad.

We saw a scenario similar to this play out last year.  After a harsh winter caused US growth to decline 2.1% in the first quarter of 2014, the economy snapped back in the spring and summer, with growth surging to its best six-month rate in 11 years.  Much of the economic activity that went missing last winter was merely shifted to later in the year.  Since underlying economic fundamentals remain strong, we expect it will not be long before we see a pickup in growth this year as well.

Monetary policy from the Fed has moved decidedly dovish as it downgraded its assessment of economic activity, mentioning that growth has “moderated somewhat” – a contrast from the Fed’s view in December when it stated that economic activity was growing at “a solid pace.”  The Fed also lowered its inflation outlook, most likely reflecting lower oil prices, a stronger dollar, and the global economic slowdown.  The Fed is “reasonably confident” that inflation will eventually return to its goal of 2.0%, although it believes this will not happen for several years.  On a positive note, the Fed’s projections of the labor market has improved due to the red-hot pace of job hiring since last summer (2014 hiring was the strongest since 1999).  The Fed moved down its projection of the unemployment rate for the next several years, and the midpoint of its long-term view of the unemployment rate is now 5.1% (it had been 5.3%).

The most anticipated part of Fed policy was its indication of the future direction of short-term interest rates.  In the past, the Fed stated that it would be “patient” with initiating the “liftoff” of interest rates.  The Fed dropped that terminology and at the same time lowered its projection of year-end federal funds rate to 0.625%; back in December it had been 1.125%.  Even after the Fed begins to raise interest rates, Fed Chair Yellen stated that the Fed will remain highly accommodative, and is not looking to slow down the economy (figure 2). 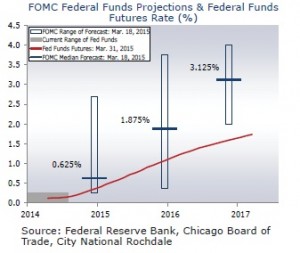 Another strong month of hiring has helped move the unemployment rate to 5.5% – the lowest level in this cycle – as it continues a strong downward trend (figure 3).  Labor demand is on an impressive streak, and hiring continues to be strong in virtually every sector of the economy.  The number of positions waiting to be filled is 5.1 million, which is the highest level in 14 years.  On the other side of the spectrum, unemployment insurance claims have been around 300,000 which is a level associated with a labor market at, or near, full employment.

A closely watched component of the labor report has been wage gains, which have been bouncing around a 2.0% annual rate since late 2009.  Wage gains are believed to be mired at this low level due to the slack in the labor market, since wages do not begin to accelerate in the earnest until the labor market approaches the full, or natural, rate of employment.  However, it is believed that this effect is beginning to change.  Faster wage gains have been seen for certain high-skilled positions, and there has been some well-publicized news of wage increases within some national retail firms. 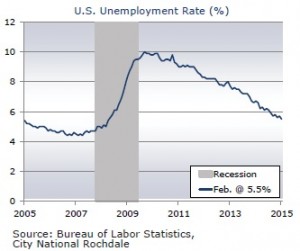 After three consecutive months of declining prices, the Consumer Price Index (CPI) rebounded, helping lift the year-over-year change in CPI out of negative territory – it now stands at 0.0%.  Although there were broad gains in many categories, the most notable change was in gasoline prices, which jumped 2.4% (up 14 cents) to $2.24 per gallon last month.  This followed seven months of price declines.  The national average gasoline price ended the quarter at $2.41, $1.29 lower than last April’s cycle peak of $3.70.

Core inflation, which excludes the volatile food and energy components, and is closely watched by the Fed, is at 1.7% for the past year.  It has been bouncing around in a narrow range of 1.5% to 2.0% for about two and a half years, reflecting no directional momentum (figure 4). 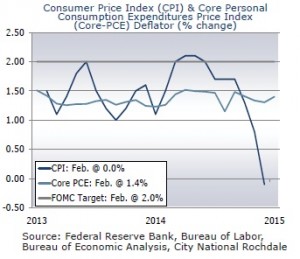 The Fed favors core inflation because it gives the best view of underlying inflationary trends (for policy decisions, the Fed prefers the Core Personal Consumption Expenditures Price Index (Core-PCE).  Furthermore, fluctuations in energy and food prices are not something the Fed can control.

Consumption by American households is the cornerstone of the US economy, composing more than two-thirds of GDP.  The data on the growth in consumption is released each quarter along with the GDP report.  Since the recession ended, consumption has been growing around 2.0% – about half the rate of the past three recovery/expansion years, which can be attributed to the slower employment recovery, loss of household wealth, and other factors (figure 5). 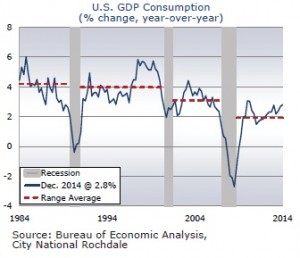 Since the consumption report is released with an inherent delay, the monthly retail sales report is often used as a guide to household spending.  Generally, it is a good guide but it does have its limitations, as it only monitors the sale of goods, and not services, which are part of the GDP consumption report.  It is surprising that despite the growing number of people on the payroll, strengthening real income growth (due to lower inflation), and surging consumer confidence, retail sales have been lackluster as of late.  The “gasoline dividend” appears not to have been spent.  Rather, it is believed that households are using the savings from lower gasoline prices to pay for services, and to pay down debt.  It is expected that once households are assured that gasoline prices wills stay low, and the weather improves, there should be a bounce-back in retail sales.

The information presented does not involve the rendering of personalized investment, financial, legal, or tax advice.  This presentation is not an offer to buy or sell, or a solicitation of any offer to buy or sell any of the securities mentioned herein.  Certain statements contained herein may constitute projections, forecasts, and other forward-looking statements.  Certain information has been provided by third-party sources and, although believed to be reliable, it has not been independently verified and its accuracy or completeness cannot be guaranteed.  Any opinions, projections, forecasts, and forward-looking statements presented herein are valid as the date of this document and are subject to change.  Investing involves risk, including the potential loss of principal.  Past performance is no guarantee of future results.  Source: City National Rochdale.