A Rough First Day On The Job. Fear Sells  Calming investors when the market pulls back is often made more difficult by the media’s framing of events to make them as newsworthy (i.e. fearsome) as possible. It’s not that the headlines are untrue, but they are framed to maximize psychological impact. Thus, in February as…

A Rough First Day On The Job.

Fear Sells
Calming investors when the market pulls back is often made more difficult by the media’s framing of events to make them as newsworthy (i.e. fearsome) as possible. It’s not that the headlines are untrue, but they are framed to maximize psychological impact. Thus, in February as the stock market gave back January’s run-up in prices, the media headlines read “Stocks erased all their gains in 2018”. Similarly, a daily decline of 4.6% or more in the Dow-Jones Industrial Index, which has occurred 19 times in the past 20 years is framed in terms of the absolute decline in the index level, so that after the nine-year run up in that index, the pull-back can be described as the biggest one-day drop ever.1

Just the Facts
When market experts are quoted explaining why markets have gone up or down on a given day, it is important for investors to remember that the experts are offering their theory of what happened as there is no way for them to know what drove the market’s behavior. If we strip away all the speculation about what might have triggered the market’s drop, we are left with a set of facts that do not seem particularly alarming: 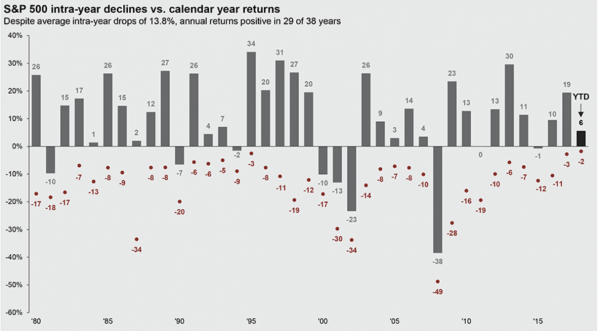 The Popular Narrative
The theory being offered for the market’s recent sell-off was that the faster rise in hourly wages and the increased yield on the 10-year Treasury bond from 2.40% at the end of 2017 to 2.85% at the end of Monday reflects the market’s anxiety about inflation.5However, there is some variation in the theories about why inflation will harm the stock market. Some “experts” speculate that the market is concerned the new Fed Chairman will not be aggressive enough and that inflation will drive interest rates higher eventually impacting stock valuations. Other “experts” speculate that the new Fed Chairman will be overly aggressive in raising rates to control the risk of inflation and frustrate the economy’s expansion. What both theories share is an anxiety that the new head of the Federal Reserve, Jerome Powell, will not be as skilled or predictable as Janet Yellen was. In other words, markets hate uncertainty and when faced with some very modest inflationary expectations, the market suddenly focused on the fact that there was a new Chairman at the Fed.

Our View of the Narrative
The net effect of the recent Tax Reform legislation may well be to stimulate demand (rather than supply) which when layered onto an already strong economy, may add to inflationary pressure. Having acknowledged this risk, market worries would appear to be getting ahead of any material change in economic or market conditions. Monday was Jerome Powell’s first day on the job and there is nothing he did or said to suggest a change to what has been the Fed’s approach of a slow and measured tightening of rates. The market’s reaction to anxiety about potential inflation and uncertainty over the Fed’s response may have been exaggerated by some technical factors that can drive markets in the short-term. Specifically, shorting volatility indices (betting that the stock market would not decline) has been a reliable money-maker for hedge funds for the past few years and may have become a crowded trade. When the market dropped causing volatility to jump, this “crowded trade” needed to unwind quickly precipitating a faster drop than might otherwise have occurred. Beyond short-volatility trades, increases in volatility generally result in continued market declines because risk-targeting strategies reduce equity market exposure as equity market volatility increases and momentum strategies reduce equity exposure following drops in equity market prices.

We see the potential return of some inflationary pressure as a greater threat to bond prices than to stock prices. Although commodities are frequently cited as a good inflation hedge, stocks have historically been as good or better inflation hedge as corporate earnings generally rise with inflation as companies try to protect margins by cutting costs or passing on increases in expenses to consumers. For this reason, selling stocks does not seem to us to be a rational response to a glimpse of inflationary pressure.

Outlook
Just as a stock market decline causes the media to reflexively frame the move as the potential beginning of a deeper decline, many brokerage firms can be expected to position it as a buying opportunity. Indeed, when the market has a steep decline in the week following a new market high, the return of the market six months after the pullback has historically been positive. This is not surprising given that even a market decline of 10% happens on average once a year and generally lasts less than six months before the market recovers to its previous peak.6 We think this is the most likely scenario for current events especially when supported by economic fundamentals that continue to be strong. At the same time, we recognize that if the market were to decline 20% from its peak or to decline for an extended period of time (e.g., 6 months or more), investor emotions can at times overrun economic or market fundamentals. For this reason, we would not necessarily reduce or increase our allocation to stocks and would instead wait for the market to provide us with more information.

Portfolio Positioning
We are generally skeptical of reactive portfolio strategies based on emotions or return forecasting, preferring instead to emphasize the construction of “all-weather” portfolios with different elements, each of which with the potential to do well in a different market environment. This speaks to stock market exposure that is diversified globally as well as among sectors and company size. In addition, we like disciplined tactical strategies that react to changes in market dynamics so that investors don’t need to. Make no mistake, these strategies will not always get it right and may be prone to whip-saws in quickly changing markets, but they have a discipline for both exiting and re-entering markets to minimize the opportunity cost of investors’ tendency to constantly expect the stock market to decline even though it rises in the majority of months. Talk of inflation will bring lots of visibility to sponsors of commodity ETFs positioning commodities as an inflation hedge. Investors should not lose sight of the fact that this reputation has more to do with the performance of CTAs (i.e., managed futures) than with long-only commodity indices and that equities have also provided effective protection from inflation.

We believe the recent market drop may feel more significant than it likely is because investors have grown used to unusually small and consistent variations in stock market returns. Both fundamental and historical analysis would suggest that the market will likely bounce back within a few months from its most recent losses. Even if markets do not bounce back right away, investors are advised to remember that the precipitous and extended declines in the market that they remember from the Great Recession in 2008/2009 are not to be confused with the typical market correction which has pull-backs that are far more modest and far shorter-lived.

Dow Jones Industrial Average is stock market index of 30 major US-based companies.
S&P 500 is a market capitalization-weighted index of 500 leading companies in the United States. It is generally considered to be representative of the US stock market.
Consumer Price Index (CPI) measures changes in prices of a market basket of consumer goods and services purchased by households.
Shorting refers to selling borrowed shares of a stock or fund, with the goal of purchasing them back at a lower price, to cover the sale.
Volatility is a statistical measure of the dispersion of returns for a security or index. Typically, the higher the volatility, the riskier the security or investment.
Commodity Trading Advisors (CTAs) use commodity futures contracts to achieve an investment objective, including hedging, systematic trading and trend following. The investments they manage are often managed futures.
Managed Futures are a type of alternative investment, using futures contracts and active trading to achieve their investment objective.
Long-only investing refers to investing in a security with the expectation of realizing a higher price at some point .