June 6, 2012 – American Realty Capital’s (ARC) subsidiary, Realty Capital Securities (RCS) assisted with the listing of a second publicly-listed REIT with the induction of health care REIT, Healthcare Trust of America, Inc. (NYSE: HTA) .  This high-quality medical office REIT follows in the footsteps of American Realty Capital Trust (NASDAQ: ARCT), who listed earlier this year in March.  HTA hopes to capitalize on the same kind of success as its predecessor ARCT.  Investors purchased shares of formerly illiquid ARCT at $10 each.  Within the first month of listing, 72 million shares had traded and ARCT hit an all-time high, closing at $11.24 per share on April 10th.  As of the date of writing this article, the NASDAQ listed stock was $11.00 and the $1.74B market cap REIT is paying a dividend yield of 6.4%.

Much in part to the hard work of American Realty Capital and a handful of other top tier real estate companies (Strategic Storage, Griffin Capital, KBS, etc.) non-traded real estate investment trusts (REITs) have evolved into being accepted as a fixed-income alternative differentiated by defensive stability, low volatility, and sustainable income, while still carrying the risks inherent in real estate.  By listing on the NYSE, HTA’s current shareholders will unlock liquidity for 25% of shares.  HTA intends to release 25% of the shares every six months, thus allowing management to control the potential demand while also attempting to maintain low volatility within the $2.5 billion portfolio (Class A shares listed in June, B-1 shares will list in 6 months, B-2 in twelve months, and B-3 in eighteen months).  HTA will also exercise a “Dutch auction” tender offer to buy back $150 million shares at a price of $10.10-$10.50.

The listings of ARCT and HTA come as a breath of fresh air for an industry that has had less than good news as of late.  REIT sponsors like Apple REIT, Inland Group, Behringer Harvard, and others have not fared as well.  Most recently Inland Group’s highly leverage shopping center REIT, Retail Properties of America, Inc. (NYSE: RPAI), listed shares with a less exciting reverse-stock-split offering.  For investors who originally bought shares at $10, the split adjusted value of the stock was less than $3 per share (a decline of over 70%).  The poorly executed liquidity event was driven by excessive debt (Q1-12 debt/EBITDA ration of 8.98x) and less desirable legacy assets purchased at the height of the real estate market.

American Realty Capital has emerged as a model of best practices for the industry which include: shorter life cycles, fully covered distributions, elimination of both internalization fees and any follow on offering, along with lower fees and performance based management compensation.  Other notable REIT sponsors on the South Coast watch list include Griffin, KBS, Strategic Storage, and Wells; all of which embody a similar approach in building portfolios of income producing real estate for investors.

HTA enters a field of 125 public equity REITs.  In the medical sector alone, there are eleven health care REITs with a combined market cap of $58.05 billion.  The average dividend yield for the health care sector is 5.15% compared to 3.27% for the entire equity REIT sector.  HTA is paying a 5.75% dividend based on a $10 stock price.  With a total debt to enterprise value of only 26.5% and $700 million of cash on the books, the outlook is good.  HTA also boasts 91% occupancy across the portfolio and a loan to value of only 27%.  The listing of HTA confirms what ARCT showed us earlier this year that listing a non-traded REIT can be a good value proposition for investors. 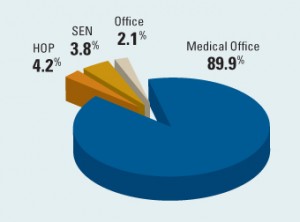 Non-traded REITs receive the same tax benefits as publicly traded REITs. By meeting certain requirements for taxable income distribution to shareholders, the REIT itself is not taxed, thereby reducing tax on the potential return on the investment, unlike traditional stock investing.  The REIT structure is simply a method of allowing common ownership of multiple properties. The compelling difference between publicly traded and non-traded REITs is the balance between liquidity and market volatility.  Assuming the REIT remains non-traded, the investor incurs a lack of liquidity since the primary outlet for selling shares is the REIT company itself.  However, as noted, reduced exposure to market volatility can be an offsetting benefit. The reverse is true of publicly traded REITs: Investors gain increased liquidity, but increased volatility exposure as well.

For investors seeking ways to diversify traditional stock and bond portfolios, REITs offer an attractive alternative. But diversification is only part of a well-designed financial plan. Risk management, or reducing portfolio volatility, is just as important.  Non-traded REITs can achieve both of these goals.  As advisors, it is our job to help our clients determine the right strategies and allocations to achieve their goals.

Following in the footsteps of HTA is the Griffin American Healthcare REIT II (GAHR2).  This real estate investment firm also specializes in the acquisition and management of healthcare-related real estate. Founded by established senior real estate investment executives, Jeff Hanson, Danny Prosky (former Chief Investment Officer for HTA), and Matt Streiff, that have more than 40 years of combined real estate investment experience and have directly overseen in excess of $15 billion in aggregate acquisition and disposition transactions over the course of their careers, more than $5.0 billion of which has been healthcare-related.  Approximately $8.0 billion of these transactions were completed as a team while they led the investment management subsidiary of a nationwide real estate firm for over half a decade.

Through a joint venture with Griffin Capital Corporation, American Healthcare Investors serves as co-sponsor of a leading publicly registered non-traded real estate investment trust that seeks to raise up to $3.0 billion in equity and to acquire a diversified portfolio of healthcare-related assets focused primarily on medical office buildings, hospitals, and skilled nursing and assisted living facilities.  To date, the REIT has built a nationwide portfolio of 55 clinical healthcare assets valued in excess of $430 million.  This non-traded REIT started purchasing assets in 2009 so has no issues of legacy assets.

Griffin American Healthcare REIT II hopes to capitalize on the success of HTA.  The American population is growing larger and older at a rapid pace.  In fact, there are 86 million baby boomers and seniors living in the United States today.  Coupled with the rapid increase in longevity due to significant advancements in medical technology, unprecedented demographic shifts are emerging that will re-shape the nation over the next several decades. American Healthcare Investors believes that these shifts will continue to result in deep supply/demand imbalances that will accrue to the benefit of healthcare real estate investors. Healthcare is already the single largest (and fastest growing) component of the country’s gross domestic product, and is projected to exceed 20 percent of GDP by 2018. Demand for healthcare services is growing at a faster pace than this country has ever previously experienced, and will continue to grow for decades to come, as will the demand for the healthcare-related real estate.  Real estate continues to be a source for above average annualized returns in South Coast’s portfolios with the healthcare sector serving a major role. 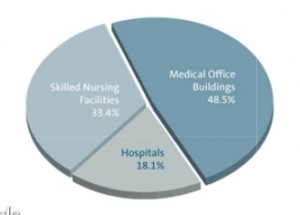