Given the weak start to the first half of this year along with the lack of a more meaningful rebound in recent economic data, many question the strength of the U.S. economy and its prospects for sustained growth ahead. With the revised gross domestic product (GDP) estimate now showing that the economy contracted in the…

Given the weak start to the first half of this year along with the lack of a more meaningful rebound in recent economic data, many question the strength of the U.S. economy and its prospects for sustained growth ahead. With the revised gross domestic product (GDP) estimate now showing that the economy contracted in the first quarter for the second year in a row, some activity trackers are suggesting that second quarter GDP growth will also be disappointing. Nevertheless, we still do not see a reason to be downbeat on the outlook currently.

We agree with Fed Chair Janet Yellen who argued in a recent speech that the slowdown in first quarter GDP growth was likely due, in large, to temporary factors (unseasonably cold winter in the Northeast and the West Coast port dispute, along with some seasonal oddities). Importantly, she also backed the idea that some of the apparent first quarter slowdown “may just be statistical noise,” a view further supported by the U.S. Bureau of Economic Analysis, which has announced that it will be reviewing the GDP figures to remove any residual seasonality.

Over the past few years, first quarter GDP growth has only averaged a measly 0.4% annualized return while the growth in the remaining three quarters averaged close to a much more robust 3.0%. Even more striking is that the pattern is far less noticeable in the quarterly growth rates of other measures of economic activity. Real gross domestic income (GDI) for instance has averaged 1.7% in the first quarter from 2010 to 2015, and growth rates of the Conference Board Coincident Indicators Index show even less of an obvious seasonal pattern in the data (Figure 1). 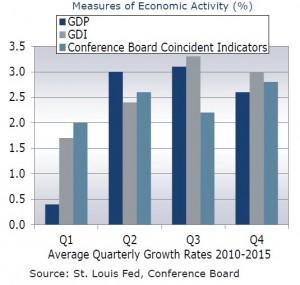 We are also less inclined to believe the U.S. economic growth has been derailed since there is no obvious cause. It is true that this expansion is now a relatively mature six years old, but in mostly every other way it still looks young. In particular, investment and durable good spending does not look excessive, while price and wage pressures remain muted. The latter typically forces the central bank to push real interest rates up sharply, eventually triggering declines in the most rate-sensitive and volatile components of expenditure (such as durable goods consumption, business investment, and housing), which is then typically followed by cut backs on both production and employment.

However, with long-term interest rates still unusually low and likely to increase slowly, it is very hard to argue that the Fed is to blame for recent economic weakness, either by ending quantitative easing or for thinking about raising its policy rate from near-zero. Indeed, at this still relatively early stage of the current economic expansion, it would likely require a pretty big adverse shock to derail growth. The dollar’s recent appreciation does not fall into that category since it has been far too small to substantially impact a closed service-based economy like the U.S. Nor does the subdued outlook for global growth qualify. Although China’s economy should continue to slow, willingness of policymakers to act has likely reduced the risk of a hard landing. At the same time, growth appears to have picked up somewhat in the Eurozone.

Certainly, if the U.S. economy could survive a fiscal tightening equivalent to 7.0% of GDP between 2010 and 2014, we believe that it should be able to survive these more modest headwinds. All things considered, we believe conditions for better GDP growth remain in place. Following the solid April jobs report, the weekly jobless claims data have improved further, with the four-week average matching its lowest rate in 15 years. This suggests continued improvement in the labor market, which should lead to stronger wage gains and more consumption in the coming months. While the retail sales data for April disappointed, services spending has been exhibiting strong growth lately, indicating domestic demand remains solid.

More broadly, at this early stage there is still very little hard data available on second quarter activity, and we would be wary of low GDP estimates that are extrapolating the weakness in the first quarter. Survey evidence, on the whole, continues to be reasonably positive. Indeed, a weighted average of the manufacturing and non-manufacturing Institute for Supply Management indices is at a level that historically has been consistent with GDP growth of around 3.0% or better. Beyond that, with real household incomes rising, credit conditions easing, and commodity prices much lower, we believe there are more than enough good reasons to remain optimistic about economic growth strengthening in the months ahead.

More than six years after the Fed slashed the overnight interest rate to near-zero, it is now poised to start increasing the rate (although the Fed has been saying this for several months now). Presently, the rate is at an “emergency level” of 0% to 0.25%, and was brought to that level due to the severity of the recent recession (Figure 2). 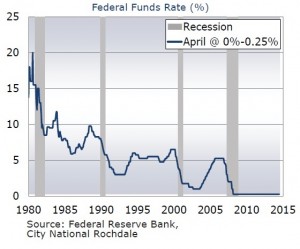 Since the economy no longer remains in an emergency situation, the Fed would like to bring the rate up to a “normal” level through a process it refers to as “interest rate normalization.” Despite the Fed’s conversation around this topic, it does not appear to be happening in June. In fact, the minutes of the Federal Open Market committee’s April meeting, released on May 21 after the standard three –week delay, acknowledge a slowdown in housing spending, concerns regarding the strength of the U.S. dollar, and low energy prices (which have undermined growth in investments and prices). However, once the Fed begins raising interest rates, it will be concerned about a reaction in the domestic and international markets. The Fed does not want a repeat of the market distress that occurred following then-Chair Bernanke’s 2013 comments regarding the onset of tapering of quantitative easing, which forced a rapid 100 basis point increase in the yield of the 10-year Treasury note. Important now is not when the Fed initiates the timing of the initial rate hike, but how quickly the Fed will move to tighten the rate beyond that. The next FOMC meeting will take place on June 16 and 17.

Job growth, which has slowed in the past few months, reflects the weaker economic growth in the first quarter. Despite this slowdown, the April labor report assuaged fears of the economy not bouncing back from the moderate economic growth in the beginning of the year. In fact, companies started hiring again in April, following the weak March labor report, which was later revised downward to 85,000 (the weakest level in almost three years). This report shows that the economy is rebounding from the brutal winter months that had helped to slow down the economic growth. Overall, there were 223,000 new jobs created in April, a healthy number that puts the growth rate back above 200,000 new hires each month – a level that occurred for the 12 months prior to the weak March report. The unemployment rate fell to 5.4% from 5.5%, and now stands at its lowest level in almost seven years. This rate has been falling rapidly – in the past year it has dropped 0.8 percentage points – and this is further evidence that the ongoing slack in the labor force is diminishing. This rate now stands very close to the Fed’s view of “full employment”, which it currently estimates to be in the range of 5.0% to 5.2%. Below that range, the Fed believes the economy will be strong enough to put upward pressure on inflation (Figure 3). 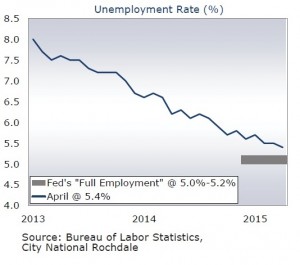 Almost three years after inflation dropped below the Fed’s target rate of 2.0%, recent data on consumer prices shows signs of increasing. Core inflation, an economist’s preferred way of looking at inflation, stands at 1.8%. This measure excludes the volatile food and energy prices, and has been in a narrow range of 1.6% to 2.0% for almost three years (Figure 4). 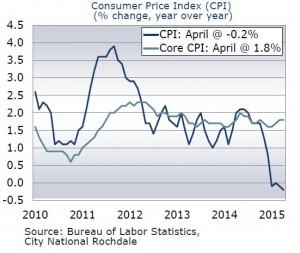 The headline Consumer Price Index, which includes food and energy prices, came in at -0.2%. This is a historically low level and is due mostly to the significant drop in energy prices over the past year.  The stability in core prices is viewed positively by the Fed. Over the past year or so, there was fear that the ramifications of lower energy prices, along with a stronger dollar that could bring in cheaper imports, would result in disinflationary pressures – something the Fed does not want at this time.

This data plays into the Fed’s believe, which was most recently expressed in the minutes from the April meeting, that it is “reasonably confident” in a near-term reversal in price pressures back toward their long-term target of 2.0%. In the bigger picture, the transitory events of the past year are now passing by and falling off the yearly calculations, thus excluding them from the measure of that inflation.

The growth rate of consumer spending fell in the first quarter, growing at a 1.9% annual rate, well below the fourth quarter ate of 4.4%, and the yearly change of 3.0%. This was surprising given that the fundamentals of the consumer are quite strong: Consumer confidence was moving up, interest rates were still low, access to credit was improving, wealth gains (home and financial assets) were increasing, and, most important, energy prices had tumbled, giving consumers a significant increase in spending, but did not. Instead, it appears that households used the money to pay down debt (part of a multi-year trend of deleveraging the household balance sheet) and increase savings (Figure 5). 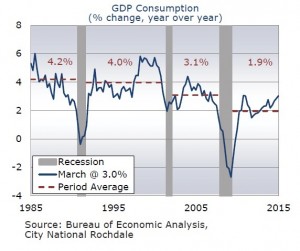 It should be noted, since consumption makes up two-thirds of GDP, that without strong consumption it is extremely difficult to have strong overall growth. Last year, consumption was low in the first quarter (possibly due to the bad weather throughout the country), but bounced back in the subsequent quarters. While the hope is that this will happen again, the second quarter is not off to a good start. Retail sales (which measure only goods) compared to consumption (which measures both goods and services) has showed moderate growth. Of late, the yearly change is at 0.9%, down from January’s 3.7%, and the post-recession high of 8.3% in July 2011.

The information presented does not involve the rendering of personalized investment, financial, legal, or tax advice. This presentation is not an offer to buy or sell, or a solicitation of any offer to buy or sell any of the securities mentioned herein.
Certain statements contained herein may constitute projections, forecasts, and other forward-looking statements. Certain information has been provided by third-party sources and, although believed to be reliable, it has not been independently verified and its accuracy or completeness cannot be guaranteed.

Any opinions, projections, forecasts, and forward-looking statements presented herein are valid as the date of this document and are subject to change.

All investing is subject to risk, including the possible loss of the money you invest. Past performance is not guarantee of future results.