Fundamentals on the Rise at Home and Abroad

Three years after stocks hit their Great Recession low, the Dow Jones industrial average has now risen over 100% from those darks days in early March of 2009. Employers added 227,000 jobs in February, finishing three of the best months for hiring since the recession began. The unemployment rate has remained unchanged at 8.3 percent…

Fundamentals on the Rise at Home and Abroad

Three years after stocks hit their Great Recession low, the Dow Jones industrial average has now risen over 100% from those darks days in early March of 2009. Employers added 227,000 jobs in February, finishing three of the best months for hiring since the recession began. The unemployment rate has remained unchanged at 8.3 percent as workers crept off the sidelines to attempt to reenter the labor force. The February hiring was spread across a range of industries, including manufacturing, mining and professional services such as accounting.

In addition to the positive news on the job front, Greece recently announced that most of its private creditors had agreed to swap their bonds for new ones worth far less. The deal clears the way for a fresh bailout from Greece’s neighbors. The drama surrounding the future of Greece and a potentially messy default have swirled around Europe for well over two years, weighing down the markets in the US and abroad at every twist and turn. Given the positive signs from Greece, concerns over issues of debt restructuring calamities in Spain and Italy have subsided as well with indications that the debt contagion will not spread nearly as far as some bears had conceived.

These improving economic readings of the past few months continue to foster an encouraging outlook for 2012. With the addition of February’s 227,000 jobs, total private-sector employment growth for the past 12 months has been just under 2.3 million in total. It seems companies are becoming more confident and cutting fewer workers as illustrated by the four-year low in first-time unemployment applications. Growing reliance on permanent full-time positions offers yet another data point that validates rising corporate confidence. For example, in 2010, temporary jobs accounted for one-third of net jobs created. That ratio fell to 9 percent in 2011, indicating the need for companies to commit to full-time, long-term workers thanks to improving corporate financial conditions.

Another pivotal bright spot for the economy has been exports, which grew 5.1 percent over the past year and accounted for 13 percent of total economic output. Growth in trade continues to underlie somewhat of a manufacturing revival in the U.S., resulting in 235,000 additional manufacturing jobs in the past 12 months. As we anticipated last year amid the renewed concerns of a double-dip recession, the U.S. economy steadily shifted out of neutral and back into expansion mode. Leading indicators point to a continuation of this trend or better as 2012 unfolds.

Mixed news on the macro front continues. The great news out of Greece comes amidst rising tensions in the Middle East which have pressured energy prices. Further disruptions in the Middle East could send energy prices spiraling much higher than the already elevated levels. In short, negative global headwinds will continue to hamper economic growth in the U.S., but the balance now tilts toward a more robust recovery, absent any major shock. Longer term, consumer de-leveraging and reduction of public debt will also keep growth rates below potential, but the good news is that the U.S. will experience a period of solid growth in 2012 and 2013.

Economic momentum is sure to boost demand for commercial space across the board. Improved corporate confidence and hiring provide critical indicators that companies are entering an expansionary period. Each property type will have a defining theme this year. Apartments will continue to outpace other sectors, particularly as long as young adults capture about 60 percent of new jobs. Additional tail-winds for apartments include favorable demographics, release of pent-up demand, and new supply levels that are sure to fall short of demand for at least another year. In the case of retail, expanding retailers will continue to outpace waning store closures by a wider margin, lending an extra boost to already respectable levels of net absorption. Fortunately, speculative retail construction remains at multi-decade lows. The theme behind industrial properties centers on growing exports and the tight correlation between retail sales and the movement of goods, simply pointing to the best year of net absorption in five years. Finally, the nearly 600,000 professional and business services jobs created in the last 12 months would appear to offer an optimistic backdrop for the office recovery this year.

We are clearly not out of the woods yet given the confluence of global headwinds still looming over a push for more robust global growth. Given this backdrop, investors with short time horizons should assume risk positions with a tactical approach, realizing that remaining flexible in your allocation will be the key to avoiding the continued reemergence of negative news from time to time. Investors with a longer time horizon should consider making some strategic allocations to asset classes listed above that are demonstrating strengthening fundamentals while still remaining affordable on a risk/return perspective. In the end, investors should take a strong look at their current allocation to determine if their shorter-term, more liquid investment strategies blend well with their longer-term, less liquid investments to ensure that whatever the economy throws your way, your portfolio and your psyche will be prepared. 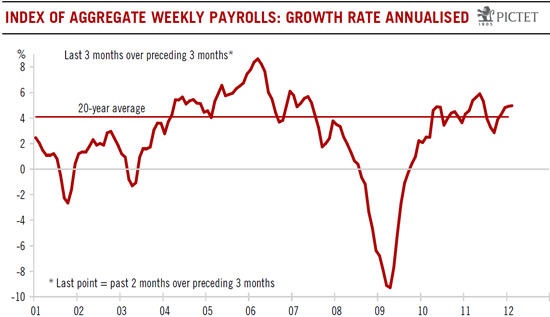