Fear and Loathing in Real Estate?

U.S. interest rates are astoundingly low and have been for quite a long time. But, it can’t last forever and investors are worried. Their fears are rooted in the perception that rising interest rates will cause capitalization (cap) rates to rise and thereby weaken property values and commercial real estate investment performance. While seemingly a…

Fear and Loathing in Real Estate?

U.S. interest rates are astoundingly low and have been for quite a long time. But, it can’t last forever and investors are worried. Their fears are rooted in the perception that rising interest rates will cause capitalization (cap) rates to rise and thereby weaken property values and commercial real estate investment performance. While seemingly a matter of straightforward arithmetic, I believe these worries are overblown because they ignore variables that have the potential to offset value declines. In fact, there are a number of factors that may provide “protection” to overall property performance in a rising interest rate environment. When we examine the relationship between interest rates and cap rates, there are many overlooked factors that I feel should soothe some investor fears. While there is no guarantee that everything will turn out alright in the end, looking at the facts shows that a full-on catastrophe is unlikely.

Let’s focus on the relationship between interest rates and cap rates, particularly in the relationship between the NCREIF Property Index (NPI) transaction cap rates and US 10-year Treasury yields, using data for the past 20 years. A rough positive relationship is evident between the two variables. But, that rough relationship does not mean that cap rates change in lock step with Treasury yields. The correlation between the two variables is not a perfect 1.0, but rather a more moderate 0.6. More importantly, historical data shows that changes in Treasury yields do not necessarily result in changes in cap rates. This does not mean that there will be no effect, but that cap rates are influenced by a wider network of variables beyond interest rates. They include real estate fundamentals, capital flows, and investor risk appetite.

In practical terms, the difference, or spread, between cap rates and 10-year Treasury yields is typically sizable and has the potential to act as a buffer that can absorb increases in the 10-year Treasury yield without corresponding increases in the cap rate. The current cap rate spread is over 500 basis points; the 20-year historical average is slightly more than 300 basis points. That extra spread means only that we can absorb an increase in 10-year Treasury yields and/or a further reduction in cap rates before property values are affected. The extra spread can be viewed as a sort of “protective buffer” from the expected rise in interest rates. 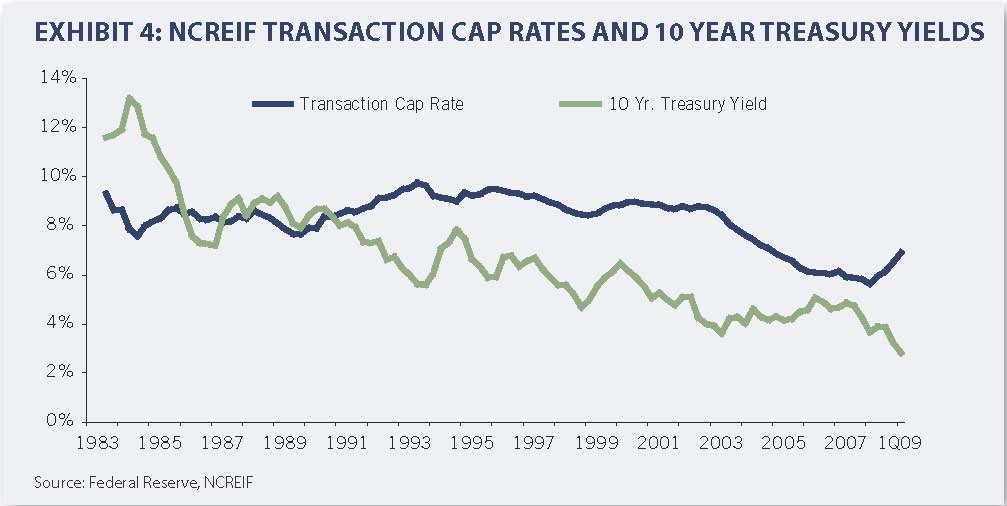 If this buffer is ignored and changes in Treasury yields are simply added to current cap rates, the results are scary. This simplistic method isolates the relationship between cap rates and property values, but fails to account for other factors that have the potential to offset value declines. In today’s environment, the most important factor that is overlooked is that interest rate increases are anticipated to coincide with strengthening economic and employment conditions. Real GDP growth is expected to strengthen from an anemic 2.1% in 2013 to a more robust 2.7% in 2014 and to an intermediate-term trend of 2.8% over the 2015 to 2019 period. The resumption of stronger growth is expected to reduce the unemployment rate as well to below 6% by 2018. The expected economic and jobs strength has positive implications for real estate occupancies, rent growth, and operations that can help offset, at least partially, any adverse price impacts of rising cap rates. Thus, the feared environment does not have to translate into catastrophic real estate performance.

Common underwriting practices should also mitigate investor worries. Investment sponsors and professionals often use a “rule of thumb” in determining terminal cap rates, where exit cap rates are assumed to be 50 to 100 basis points higher than going-in cap rates over the holding period. This practice typically reflects the aging (finite life) of the property. As a result, cap rate increases are typically accounted for in return expectations, thus, eliminating some of the potential “surprise” associated with them.

Perhaps the simplest way to isolate the impact of rising cap rates on real estate performance is to examine some scenarios using a simple internal rate of return (IRR) model. We can analyze holding periods, ranging from one to ten years, each using the same assumptions, but with various exit cap rates. We will assume that the annual net operating income (NOI) growth equals 2.4%, the consensus inflation expectation from the Blue Chip Economic Indicators® over a 10-year horizon. By varying the exit cap rates, we can isolate the effects of rising cap rates over the different holding periods. Not surprisingly, with everything else being equal, larger exit cap rate increases above the base case result in poorer overall investment performance. But, the deterioration is not uniform across time. The timing of cap rate changes matters a lot. In the near term, cap rate increases have a dramatic impact on property performance, but as time passes, IRRs approach the base case. As long as NOI is growing, time will mitigate the negative impact of a rising cap rate environment.

As for the bottom line; keep calm and carry on. Fears that the eventual rise in interest rates will result in higher cap rates and declining property values are only justified if everything else is assumed to be unchanged. While this assumption might seem reasonable, it oversimplifies the more complex nature of reality and ignores factors that have the potential to offset value declines. As a result, investor fears are likely exaggerated.

In summary; first, cap rate increases are typically accounted for in return expectations through common underwriting practices and current cap rate spreads are above average. So, investors are prepared for some upward movement in cap rates. Therefore, we should not fear the cap rate increases that we expect, only the ones that we do not expect. Second, real estate performance is less sensitive to cap rate changes as the investment horizon lengthens. But, if cap rates rise in line with interest rates, they can have a dramatic impact on property performance in the near term. Thus, the timing of cap rate changes matters and time has the potential to heal most, but not all, wounds from rising interest rates. Third, compounding annual NOI growth has a powerful impact on property values; the stronger the growth, the greater the protection against adverse movements in cap rates. This last point has important implications for property and market selection, and suggests a strong preference for investments with solid NOI growth, further validating our target market selection process. It also suggests that higher-yielding, lower-growth investments may not be as alluring as some believe.