Evidence of a 2nd Quarter Rebound is Building

The latest upward revision to first quarter GDP suggests less of a decline in U.S. economic activity across the first three months of the year than was previously thought. While a decline is still disappointing, we are inclined to look through the softness in the GDP statistics, given the adverse weather early in the year,…

Evidence of a 2nd Quarter Rebound is Building

The latest upward revision to first quarter GDP suggests less of a decline in U.S. economic activity across the first three months of the year than was previously thought. While a decline is still disappointing, we are inclined to look through the softness in the GDP statistics, given the adverse weather early in the year, the significant distortions to trade from the West Coast port slow-down, and the effect of residual seasonality that has consistently suppressed growth in the first quarter during the recovery. Further, with job gains, core durable goods orders, auto sales, construction, and housing data all recently surprising to the upside, there is now a wide mix of evidence showing that the U.S. economy is growing again.

Most importantly, we are now starting to see signs that consumers are finally coming out of their winter hibernation and beginning to spend some of the gasoline savings they have been sitting on since the start of this year. Retail sales have recovered back in line with their previous upward trend (Retail Sales Growth), and May’s increase in overall real consumer spending was the biggest monthly gain in six years. Both of these developments help to confirm that the earlier weakness in first quarter consumption, with “only” increased by 2.1%, was mostly a temporary weather-related blip. 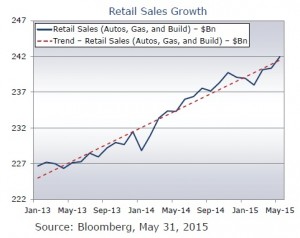 With the economy still adding a large number of new jobs each month, and wage growth beginning to accelerate, there is every reason to expect consumption growth will remain strong. The conventional wisdom is that, despite rising employment and income, households have remained unusually restrained during this recovery. Yet, over the past four quarters, consumption appears to have been growing at an average annualized pace of 3.1%. That is pretty strong. The average quarterly gain between 2003 and 2006 (when the housing bubble was at its peak and debt-fueled consumers were spending like drunken sailors on leave) was only 3.5%.

While it is true that consumer spending has been lower overall compared to previous cycles, given the magnitude of the financial crisis, it is understandable that households have been cautious. For example, even though households net worth as a percent of disposable personal income is almost back up to its pre-recession high and household debt service costs are at record lows, the savings rate remains well above its pre-recession low (Household Debt Service Costs). The upshot, however is that, with the household sector healthier than we have seen in years, we believe this consumer spending cycle is likely to be prolonged, in part due to the lack of excesses and a savings cushion. 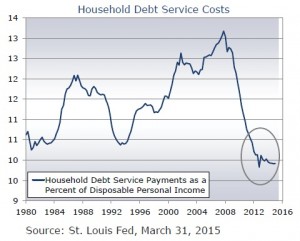 All this in turn bodes well for other sectors of the economy. With younger people growing confident enough in their financial conditions to leave their parents’ nest, household formation has finally begun to turn up, leading to more first-time home buyers entering the housing market. For the beleaguered factory sector, a continued strengthening in the domestic demand should offset headwinds from the stronger dollar and foreign economic weakness. U.S. consumer spending is a significantly more important driver of U.S. manufacturing activity than the dollar, while the rising trend in housing activity is also a support for better industrial production through increased manufacturing of construction supplies.

Unlike in previous business cycles, the Fed is under no pressure to rein in unsustainable growth or curb mounting inflation as it mulls the timing of its first interest rate increase in nearly a decade. Still, despite a few blips, economic growth over the past year appears to have gained momentum and indicators suggest it should continue. The crisis that resulted in the unprecedented lowering of the federal funds rate to zero is long past, and a gradual return toward more normal levels should be viewed as a healthy development in the maturation of a business cycle, indicating that economic fundamentals are strong enough to support further growth ahead.

At its regular meeting, the Federal Open Market Committee (FOMC) voted unanimously to leave the federal funds rate unchanged, even though it believes the Fed will raise interest rates later this year. The general consensus is for the Fed to begin raising rates in September, assuming that the economic data continues to fall in line with expectations. Federal funds are currently in a range of 0.0% to 0.25%, and have been in this range since December 2008. The Fed projected a shallower path to future rate increases than previously thought and has stated that additional interest rate increases will be done at a gradual pace.

The Fed has a favorable view of the economy, despite the first quarter’s negative growth rate (which was likely transitory due to bad weather, the West Coast port slow-down and a reduced investment in the energy sector). Recent data was highlighted by two sturdy employment reports and stronger consumer spending than previously thought. Although the Fed has downgraded their forecast for 2015 – due to the weak first quarter – growth was revised slightly higher for 2016 and 2017.

With regard to inflation, price pressures have been below the Fed’s target rate of 2.0% for the past three years, but the Fed firmly believes inflation will move up to its target rate. Recent data has shown promising signs of wage and price inflation.

The Fed made no reference to the recent International Monetary Fund request to postpone the rate raise until 2016.

Job creation in the past two months is back on track following a weak March report (which has since been updated to show less weakness). Growth in payrolls for April and May averaged 250,000 new jobs, just below the 2014 monthly average of 260,000 (Change in Nonfarm Payrolls). This is important evidence that shows two things: first, the underlying trend in the economy continues to improve and, second, there remains a forecast of stronger economic growth in the second quarter. 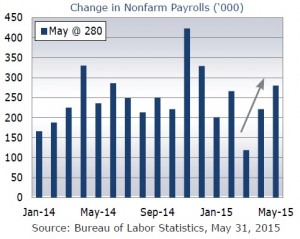 The unemployment rate moved up a notch to 5.5%, from 5.4%, due to more workers joining the labor force. This is a good thing, as it suggests discouraged workers are returning with the hope of getting a job. Since the low point in unemployment in March 2010, there have been 12 million new jobs created. While this strength is eroding away at the slack in the labor market, nascent wage pressures are beginning to build. There has been improvement in average hourly earnings, which are up 2.3% in the past year, matching the highest level of growth in the cycle. This is being corroborated with notable improvements in the Employment Cost Index, which has increased over the past few quarters.

Consumer prices have been firming of late, as witnessed in the three-month change in the Consumer Price Index (CPI), which is up 3.2% (annual rate) (Consumer Price Index). This rate is much higher than the Fed’s target rate of 2.0%, and well above the year-over-year change of just 0.0%. The plunge in gasoline prices last year has dampened the yearly inflation number. The gasoline price decreases started last June and will soon be rolling out of the year-over-year calculations, putting upward pressure on future inflation reports. 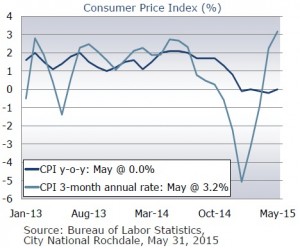 There have also been price increases in recent pipeline inflation figures, such as the Producer Price Index and the Import Price Index. This trend is giving the FOMC (the monetary policy-making arm of the Fed) more confidence that inflation will return to its desired level. Although CPI is not the Fed’s desired metric for measuring inflation (the Core Personal Consumption Expenditure Index is), it is one of many inflation measurements that the Fed follows to gauge price pressures of the overall economy. However, the Fed is not fully convinced. There are some headwinds (a strong dollar, and weak global growth pulling down commodities prices) which may dampen the effects of stable energy prices. Still, the “trend is your friend,” and that trend is showing that inflation is moving closer to the Fed’s target.

This marks the third time in the past four months that we have addressed the consumption portion of the economy. Its importance is high since it represents about two-thirds of the economy, and it has been on a roller coaster fide over the past six months. In the fourth quarter of last year, consumption grew a robust 4.4%. In the first quarter of this year, it grew just 2.1%, likely brought down, in part, by the harsh winter weather. Second quarter growth is not yet known, but early forecasts were showing relative weakness. That has changed recently with the release of the May retail sales report, which is a barometer for overall consumer spending, and showed significant growth and revisions to prior months (Retail Sales). The monthly retail sales report measures goods sold, whereas the consumption part of the GDP report (which is part of the quarter GDP report) measures goods and services. The new data is consistent with many of the “big picture” fundamental issues that support stronger consumption: continued gains in employment, higher consumer confidence, easier access to credit, record high household wealth, and lower energy prices. 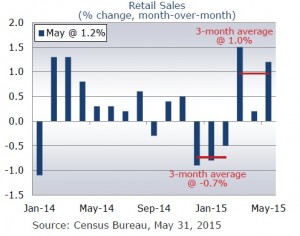 The information presented does not involve the rendering of personalized investment, financial, legal, or tax advice.  This presentation is not an offer to buy or sell, or a solicitation of any offer to buy or sell any of the securities mentioned herein. Certain statements contained herein may constitute projections, forecasts, and other forward-looking statements.  Certain information has been provided by third-party sources and, although believed to be reliable, it has not been independently verified and its accuracy or completeness cannot be guaranteed.Any opinions, projections, forecasts, and forward-looking statements presented herein are valid as the date of this document and are subject to change.