The economic backdrop in the first quarter was muddled, with extraordinarily severe winter weather throughout much of the country adversely impacting economic reports into March. Early in the quarter the uninspiring data, combined with concerns about emerging economies, was enough to prompt a sell-off in the stock market. Investor angst was already elevated due to… 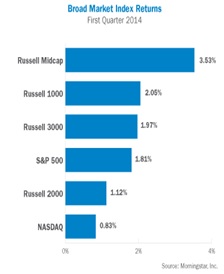 The economic backdrop in the first quarter was muddled, with extraordinarily severe winter weather throughout much of the country adversely impacting economic reports into March. Early in the quarter the uninspiring data, combined with concerns about emerging economies, was enough to prompt a sell-off in the stock market. Investor angst was already elevated due to the Federal Reserve’s (“Fed”) decision in the previous quarter to begin tapering its asset purchases. In addition, the Fed transitioned to a new chairman in the first quarter, with Janet Yellen assuming leadership of the central bank, taking over for Ben Bernanke. By the end of the quarter, however, economic trends began to improve coincident with the warming weather. The Bureau of Labor Statistics raised its third estimate of fourth quarter gross domestic product (GDP) to 2.6%, as consumer spending was stronger than anticipated.  The employment situation also enjoyed an uptick, with a better-than-expected 175,000 jobs added in February, and while the unemployment rate actually rose modestly to 6.7% from January, it was below the 7.0% reading from three months earlier. 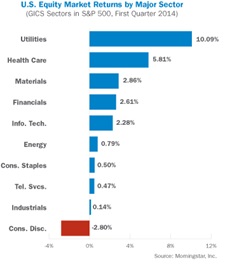 Globally, the primary storyline involved emerging economies, which were negatively impacted both by fears of how the Fed’s tapering decision would impact liquidity, as well as slowing growth in China. These concerns caused emerging markets stocks to swoon during much of the quarter, although performance began to recover late in March.  Emerging economies with current account deficits will be under pressure as U.S. interest rates rise. In the eurozone, economic gains continued to be slow but steady as the region recovers from its deep recession. Real GDP increased a relatively modest 0.3% on a quarter-over-quarter basis, but policymakers were encouraged that it represented the third consecutive gain. The European Central Bank (ECB) remains concerned about downward pressures on the region’s economy, and stated that it will take necessary action to provide stability to the economy.  Chinese policymakers are finding it difficult to sustain previous levels of growth as its economy expands. The country’s economy grew at a rate of 7.7% last year, and authorities are moving away from the “growth at all costs” mindset as they grapple with an overheating property market and significant pollution in its most populous areas. Policymakers are considering setting a more modest growth target of perhaps 7.0%-7.5% to achieve a goal of “growth without negative consequences.”

During the first quarter the Federal Open Market Committee (FOMC) made a change to its forward interest rate guidance, eliminating the quantitative thresholds for triggering rate increases The FOMC had previously stated that it would increase short-term interest rates if the unemployment rate fell below 6.5% and inflation was above 2.5%.The FOMC stated that the removal of the thresholds was not intended to be an indication of a policy change, but the consensus among economists is that rates will begin to rise sooner than previously anticipated, perhaps in early  2015.