Commercial real estate markets face a very unusual imbalance in most parts of the country: vacancy rates remain elevated, but in spite of them, new construction is still too low. That of course sounds contradictory because construction should be low when vacancy rates are high. Looking forward, however, as the domestic economy continues its moderate…

Commercial real estate markets face a very unusual imbalance in most parts of the country: vacancy rates remain elevated, but in spite of them, new construction is still too low. That of course sounds contradictory because construction should be low when vacancy rates are high. Looking forward, however, as the domestic economy continues its moderate growth there will not be near enough supply to keep pace.

The headlines these days speak to the risks facing Main Street America today: unemployment, lack of income growth, household debt, and to a differing degree, the European financial crisis and other economies like China and India which could run into trouble in 2012 as well.

The European and the American economies are deeply intertwined. Trade is the major channel through which ongoing stress in the European Union will affect the United States. In 2010, 22.5 percent, or $412 billion worth, of U.S. exports in goods and services went to the European Union. A sharp economic downturn in Europe means demand for U.S. products and services are likely to decline significantly. Falling U.S. exports will be an additional drag on the economy and on jobs at a time when America can least afford it.

While it is now reasonably certain that the United States will not escape Europe’s travails unscathed, it also appears that Europe is not headed for the utter collapse that many pundits have rattled on about over the last year. The most likely forecast is that Europe muddles through its problems and thus the United States enjoys moderate but not great economic expansion.

This guardedly optimistic view of the domestic economy is based on the following factors: (1) Corporate America remains in a relatively strong position where they’ve found themselves sitting on tremendous amounts of cash, they are not burdened with high debt structures like our government, and benefit greatly from these extremely low interest rates, (2) because monetary policy operates with some lag-time, the Federal Reserve’s second round of quantitative easing (“QE2” – strategy to reduce rates by acquiring $600B in long duration treasury bonds) which ended in last June will continue to spur credit growth and in turn, continue to help rebuild the fragile consumer confidence.

This doesn’t mean that we expect enough growth to get us all back to feeling good again. The unemployment rate will likely remain above normal, but could decline to about 7.5 percent by the end of 2013.

Past real estate cycles have been dominated by interest rate swings. Given the Fed’s recent stance and their move earlier this month to break with long-standing tradition to start announcing on a quarterly basis its forecasts for short-term interest rates and other indicators of economic conditions, we’ll likely avoid reliving those swings. We will continue the downward creep in long-term interest rates for those borrowers with good credit, and there’ll still be no loans available to those with less-than-great financials. Going forward into 2013 and beyond, long-term interest rates may rise but not to such high rates that development is choked off.

Construction planning is fairly hodgepodge these days as financing is still tighter than average, though not quite so hard to come by as a year ago. Many developers lack the equity that their bankers want, especially with so much doom and gloom consuming the daily headlines. The key fact to remember, however, is that demand for space can grow much faster than space can be built. 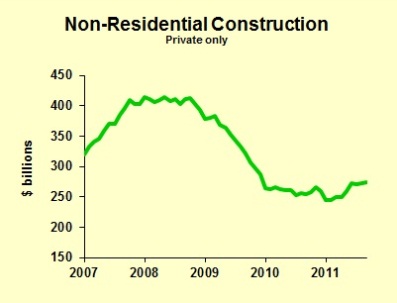 There have been periods of high vacancy rates and low construction in the past. What usually happens—but isn’t happening now, at least not yet—is that developers look forward, see the tightening of the rental market, and then begin speculative projects. This reduces the swings between high vacancy and low vacancy. Instead of the market tightening too quickly to an extremely low vacancy rate, the new speculative supply satisfies the rapid increase in demand. Because that’s not happening now, we may see a pronounced move to a landlord’s market in a few years which would bode very well for those that made sound acquisitions in the face of the pervasive headline risks.